I think I was born with a nomadic gene. Even as a child, I’ve always envisioned myself visiting foreign lands, faraway places I could only dream about. Growing up in a third world country, I didn’t give my aspiration much thought and although it remained buried within, the possibility of making it a reality seemed out of reach. Years fluttered by but the dream remained constant.

Eventually, leaving family and friends, I moved to the U.S. It didn’t take much time before the ember of wanderlust started to simmer. I decided to go to London and Paris for two weeks. That was the catalyst I needed. Before long I started plotting and planning my next trip. I quit my job, gave up my apartment and I was off. By myself. I spent 8 months meandering in Western Europe, parts of Eastern Europe (Hungary, Czechoslovakia and the former Yugoslavia) as well as Morocco. Finally, with funds running low and getting homesick, I had to hold off the rest of my itinerary, with the intention of continuing after a short hiatus. But life got in the way.

In the ensuing years, I got sucked in to the vicissitudes of life and although I have gone on several short trips since then, there is nothing like being able to decide along the way how long to stay in a place or where to go next and take things as they come.

Fast forward: much older now with more freedom from a cut-and-dried schedule. The latent yearning to gadabout and experience the world is rearing its head. I guess I am a vagabond at heart. 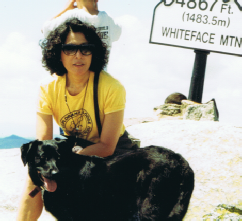